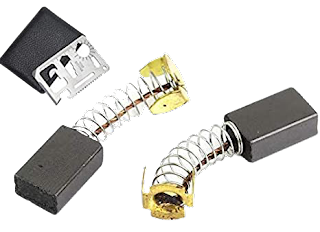 What is Carbon Brush?

There are 2 parts inside any motor, the first Stator, and the second Rotor, supply can be given to the Stator in the Motor easily whereas it is a bit difficult to supply to Rotor because the rotor is a Rotating part, and in this Rotating part if we have any Will also use wire to supply, then the wire will break?

So for the solution to this problem, Carbon Brush is used, by the way, there is also a part above the Rotor which is called Commutator, on which the Carbon Brush touches and passes the current till the Rotor?

Where do you use Carbon Brush?

Carbon Brush is used in Motors, Generators, Auto-Transformer, Mixer Grinder, is it used to supply current inside Rotor?

Why Only Carbon Brush is Used in Motor ?

By the way, why most of the brushes of carbon are used in the motor, there are many reasons why copper and aluminum are not, we look at all the reasons one by one?

To use as a brush in motors, such a material is needed which has a high melting point, because when the rotor is rotated, there is friction between the commutator and the brush due to which heat is also produced, and if the copper brush is used here If used then it can also melt due to high temperature, that is why carbon brush is used in motors?

2) Carbon is Soft as compared to Copper: Carbon is a material that is much softer than Copper and this is what we need because when the brushes touch the commutator of the motor and pass the current to the rotor then between the commutator and the brush Is there a lot of friction?

If we use a copper brush, now copper is hard, then due to friction, there can be commutator damage, that is why carbon brushes are used, now see that when there is friction between two things, then one or the other thing is less. Will it happen?

3) Carbon Easily takes shape on commutator: As carbon is soft and when there is friction between brush and commutator then if copper brushes are used they can damage the commutator and carbon brushes easily take shape of commutator can?

As the commutator is in round shape, brushes of the same shape carbon are taken so that the brushes touch the commutator completely and the flow of current becomes easy.

But the carbon that is there is a non-metal i.e. Negative Temperature is co-efficient of resistance, so when the brush of carbon touches the commutator of the motor, the temperature increases due to friction, and the resistance decreases, which reduces the resistance of the brush. And the current is able to pass well inside the rotor?

5) Carbon is Self Lubricate: When the brush of carbon touches the commutator, then the commutator rotates very easily without any problem?