Hello friends, welcome once again to this website of ours today in this blog post we will know how to make electricity from water so let’s start? 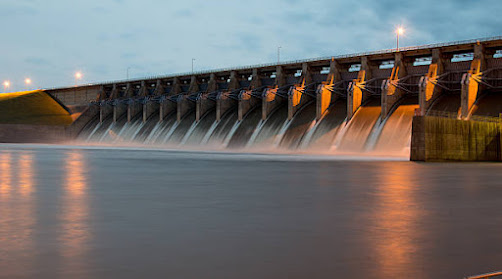 To make electricity, the most important thing is that it is called Alternator (Generator), its job is to convert mechanical energy into electrical energy?

Fuel is used as a primary source of energy, whereas fuel is used to heat water because steam has to be made and this steam is then struck on the turbine so that the turbine can be rotated?

Or we can say that a Turbine is a device that converts hydraulic energy or pressure energy into mechanical energy?

3) Generator: Now the most important thing is the ‘Generator’ that makes electricity, the shaft of the generator is kept by coupling (connecting) with the turbine and when the turbine rotates then the generator also rotates and electrical energy produces?

If you want to see the video made on this topic, then click on the link given below?

So the process of making electricity from water is called hydroelectricity?

That is, to rotate the turbine with the pressure of water?

The cheapest fuel used in “Hydropower plants” is ‘water’?

There are many parts of Hydro Power Plants such as:-

1) Reservoir: In Rainy Season, water is collected in Reservoir, it can also be a Natural or Artificial Lake. Reservoir We can say that a Tank which is made behind the Dam?

2) Dam: Dam i.e. the dam which is used to keep the water up to the height so that when it is released then the pressure is high, is the dam made from concrete or from stone?

3) Spillways : When the Reservoir gets full of water during a flood, then the Spillways Safety Valve starts working like extra water when it is not needed then spillways are discharged through spillways are made over the dam?

4) Surge Tank: Surge Tank would be a conservator tank i.e. we can say that an empty tank when water is more or less than required in Turbine then water is taken or given from the Surge tank?

5) Penstocks: Penstocks are like a pipe that connects the Surge Tank and Turbine together as you see in the diagram?

6) Turbine: Water Turbine is a prime mover whose job is to convert the pressure energy of the water or we say convert the Kinetic energy of water into mechanical energy?

7) Generator: The generator is connected to the shaft of the turbine, so this mechanical energy is converted into electrical energy by the generator?

How does Hydro Power Plant work?

So first the water is collected in the Reservoir, then this water is released through the Dam and this water strikes the Turbine through Pen Stocks?

And there are many other things in the middle like Surge Tank, and Spillways, their job is to maintain it when the water pressure is more or less?

So this is how a hydropower plant works and in this way electricity is made from water?

1) In a hydropower plant, do we use water as a fuel, which makes it cheaper?

2) Hydropower plants do not cause any kind of pollution?

3) If we use water as a fuel, then the running cost of the plant is significantly less?

4) Hydropower plant can be switched on instantly whereas steam power plant takes some time to start?

5) Hydropower plants help in controlling the flood and in the irrigation of the field?

1) What is the initial cost to build a hydropower plant?

2) When the water is available to run the plant when the ice melts or during the rainy season, that’s why it has to depend a little on the weather?

3) After the generation of electricity, the transmission cost is high to transmit it because Hydropower plants are always built on the banks of the river?